This weekly recap post is a unique one, as it includes a lot of running in Scandinavia!

If you missed it, I shared this Fits on the Road post about the first part of our trip, which included Copenhagen, Denmark and Gothenburg, Sweden. I plan to share similar posts about the rest of our time in Norway; I’ll keep this recap post a bit shorter and focused on fitness. But please stop by later this week for more amazing pics of Norway, (it’s a gorgeous country.)

I am now 13 weeks out from the Houston Marathon. Time is flying by!

I feel like I did a decent job of getting in as much running as I could on vacation, while ensuring that running added value to the vacation, vs. missing out on any ‘vacation’ due to running. Fortunately, running is a great way to tour! But in addition to the running I fit in, there was a lot of walking and some serious Norwegian hiking.

Here’s how things worked out this past week:

Monday: Ran 7 miles in Gothenburg, Sweden. As I mentioned in this Fits on the Road post about Copenhagen and Gothenburg, we arrived in Gothenburg around 1 pm to an absolutely stunning day, 65 degrees and sunny. We ran through Slottsskogen,  a beautiful park in Gothenburg. It had some serious hills and we were just taking it easy and stopping for pictures. Awesome run.

Tuesday: Ran 4 early miles in Gothenburg, Sweden before heading to Volvo to pick up our car; then a long hour drive to Lofthus, Norway.

Wednesday: No run today. Yet that doesn’t mean we were lazy! Instead, we hiked for over five hours in Lofthus, Norway. The first hike was called Her Majesty Queen Sonja’s Panoramic Hike. Unfortunately, the weather was rainy and very cloudy, so not much for panoramic views!

So disappointing, as the pictures we’ve seen online were amazing. Oh well. 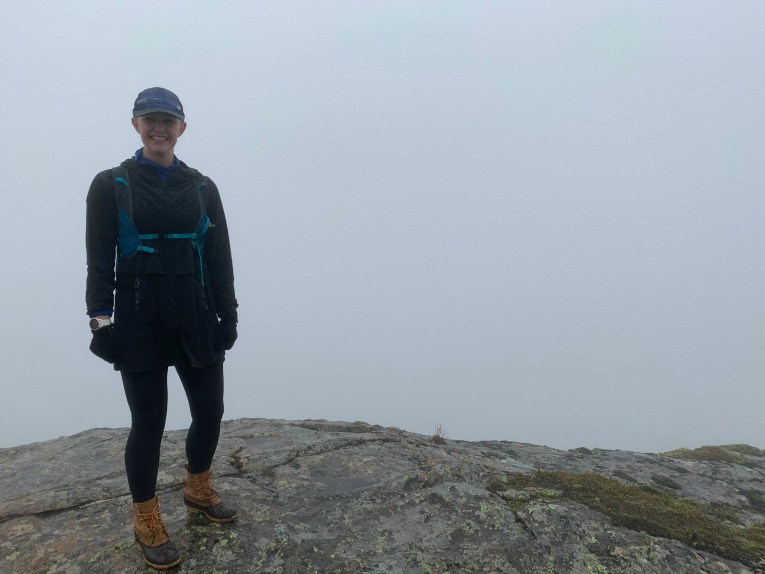 This hike was a little over 4 miles round-trip.

The second hike of the day was the hike to Vøringsfossen. This picture is after we had already hiked about 2 hours to get to the falls. If you’re ever in Lofthus, do not expect this to be an easy hike!

This hike was shorter, but quite challenging, with tons of clambering over slippery boulders. I was nervous as to how well my ankle would do, but I just took things slow and careful. Gorgeous hike.

This hike took a lot out of me (or maybe it was the combination of both hikes, but this one was hard); I was so sore the next day, almost as though I had run a marathon! Guess I should have hiked a bit more prior to this intense of a hike.

You can see in the below picture before we arrived at the suspension bridge, that there wasn’t a true path, just climbing over rocks. Challenging!

Thursday: 5 mile run in Lofthus; the concierge at our hotel said this was the easiest place to run in town, but it was still pretty challenging. There was a lot of walking uphill on this one!

Later that morning, we also did a 4.5 mile hike to a waterfall we never found. Apparently we took a wrong turn somewhere, but had to turn around eventually to get on with our trip.

Friday: 3.1 mile run in Solstrand, Norway. Just a short little run to watch the sunrise! There was a paved trail along the shoreline in front of our hotel that went into town and back.

My friend Julie studied abroad in Bergen and I had asked her ahead of time if she had any recommendations of where to run and her response was, “I hope you like hills!”

Bergen is quite hilly! We did follow her advice as far as a location to run, heading straight up a mountain (okay, it just felt that way 🙂 ) to an area called Fjellveien, which was a paved trail near the funicular that takes you to the top of the mountain. It was great for running as it had limited car traffic.

Apparently, the route was part of the Bergen City Marathon!

We ran up and down the route twice to get to just under 13 miles. I was happy to get in double digits on vacation. It was a beautiful day in Bergen!

Sunday: Well, I guess I spoke too soon! Another double digit run, though this one was a bit more of a hike/run. We took the Flåmsbana train from Flåm to Myrdal, which is about a 50-minute train ride. We got off on the platform and it was so cold, windy, and rainy!

We considered just buying a return ticket on the train and finding something to do indoors instead. But instead, we gathered up our toughness and decided to go for it and run back down to Flåm on the Rallarvegen path.

The Rallarvegan route includes 21 hairpin turns to get down the mountain. It was quite steep in the beginning, as well as wet and rocky, so that was mostly walking. I do NOT want to break a leg again!

Eventually it did turn into a paved path, but we took lots of breaks for pictures, so it took awhile to get down (about 2.5 hours I think.)

Running through this tunnel was a little weird- it actually was pretty dark in the middle!

We may have been wet, but the scenery made up for the weather!

I was very ready for a hot shower and dry clothes by the time we finally finished.

Summary: 45 miles of running, about 10 or so more miles of hiking and lots of walking. This is a decrease in total mileage from the past couple of weeks, but not bad for vacation, right? (Sorry coach, I did what I could!)

Anyone reading been to Norway? I feel like it’s not that popular of a place to visit, but it is so unbelievably gorgeous, I definitely want to come back and see more. We did not have time on this trip to go to the Arctic Circle where you are guaranteed to see the Northern Lights. Next time!

Thanks so much for reading and be sure to check out all the other great weekly recaps that are a part of HoHo Runs and Taking the Long Way Home ‘s weekly recap link-up!

So amazing that you were able to get in not one, but two double digit runs while on vacation! It must have been amazing to have those awesome views during your runs and hikes.

It’s been a lovely change of scenery!

My BIL worked in Norway for a year. I always kick myself for not getting a visit in while he was there. It’s so pretty!

How fun! What city/village was he in?

Wow, great running and all that hiking definitely made up for any “lost” miles. You would NOT get me on those slippery boulders for all the tea in China!!

I do want to go to Norway, I’ve seen the Northern Lights in Iceland but Norway does look like a lovely country.

Those slippery boulders definitely made me nervous!

I’m sure the Northern Lights in Iceland were amazing!

OMG what a great trip! Norway may be my favorite country of all. It’s been 18 years since I’ve been there but isn’t it just so stunning? Your pics are beautiful, even in nasty weather. Kudos to you for getting out and really taking advantage of all Scandinavia has to offer!

We tried to embrace the weather- it made things interesting!

Norway is so beautiful! I wonder if its changed much (become more touristy perhaps?) in 18 years if you went back.

Norway has been on our travel bucket list for years! I actually studied Norwegian in college, but regretfully never made it out to Norway during that time. I have a feeling I’ll never want to come back home once I get there 😉

That’s so cool you speak Norwegian! I think you’d fall in love with the country, especially since you speak the language 🙂

I’ve never been but it sure looks gorgeous & I love to hike! You may have had less miles running, but the hiking should make up for that. I got very little hiking done this year. 🙁 The weather was just not great this summer.

If you love to hike, Norway is a great place to visit!

I haven’t been to Norway. The pictures look amazing! Steep hiking is very strenuous and should count double (or triple) for the effort it requires. It’s pretty cool that your Saturday route was part of their marathon course too! Double digits on vacation is always a win! Thanks for linking.

Thanks for hosting the link-up! I like your thinking, that the steep hikes count double 🙂

How are you liking the Story Jacket? I am seeing it in a ton of your photos!

Hi Katie- I bought it on sale and packed it in my suitcase because it didn’t take a lot of space. It wasn’t the best jacket for a rainy day as its not technically waterproof and it trapped a lot of heat. However, I still obviously like it and am wearing it a lot as a light wind jacket. 🙂

Thanks for your insight! I think it’s cute, and the sale price is good too.

This is all beautiful! I would love to visit Norway. We get the Northern Lights here occasionally, but they are very faint compared to what you see in photos. I’m told the photos are so much brighter because of the long exposure times, but I wonder if the lights are brighter in person when you’re in the Arctic Circle?

We get the Northern Lights occasionally in Minnesota, but nothing like what they get in Norway apparently. Im sure the pictures I’m seeing though are not just with an iPhone, haha 🙂

What a great adventure! I have a strong Norwegian heritage, but have never been to the mother country LOL How exciting to get all of that international running/hiking done!

It’s a great place to visit! Actually, fun fact, more people in Wisconsin/Minnesota (probably the Dakotas and maybe Iowa?) have Norwegian grandparents than there are people in Norway 🙂

Weekly Recap: 12 Weeks Until the Houston Marathon - The Right Fits

[…]  After a fun but tough 13-mile run in the rain the previous day (read about that HERE), Dustin decided he was going to rest today, so I did 6 miles on my own in Flåm, Norway. This was […]

What great photos, especially love the sun on the mist
Congrats on super solid week

I’ve never been to Norway but I would definitely like to. It just looks so stunning, even in the rain!

Yes, it is so beautiful there!!! The rain didn’t hold us back 🙂

Thank you for stopping by!

This is my blog about finding The Right "Fit." I'm an avid runner, marathon enthusiast, and fitness experimentalist who uses my little space of the internet to share my passion for and experiences with running and fitness (...and a little about fashion.)

I write mostly about running and my quest to run a marathon in every state and every continent. But you'll also find some information about different fitness classes in the Twin Cities and more.

15 weeks until marathon #41, the @vienna_city_mara

Last post on the grid about Lapland, I swear!😁

A unique experience overnight in what was basicall

The stunning light above the Arctic Circle! #levi

I was told it didn’t snow in London. I’d like

Dustin and I “participated” in our family turk

“Danube River Cruise.” aka, “We are too old